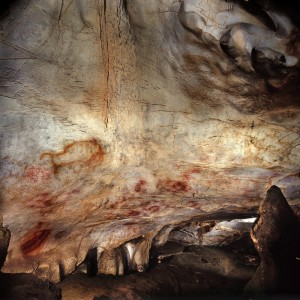 The never-ending competition to find the oldest known cave art has a new leader. An international team of English, Spanish and Portuguese researchers have dated paleolithic paintings in Northern Spain’s El Castillo Cave to at least 40,800 years old.

This news means that the practice decorating caves in Europe began between 5,000 to 10,000 years earlier than previously believed.

As part of the research, the scientists dated some fifty paintings in 11 caves in Northern Spain, including inside the UNESCO World Heritage sites of Altamira, El Castillo and Tito Bustillo.

Due to the lack of organic pigment in some of the paintings, the teams could not use radiocarbon dating to find out the age of the paintings. Instead they dated the thin calcite cave formations that developed on top of the art using a process called uranium-series disequilibrium, which measures the radioactive decay of uranium to find the age.

As a result hand stencils and disks made by blowing paint on to the wall in El Castillo cave were found to date back to at least 40,800 years, while a large club-shaped symbol in the famous polychrome chamber at Altamira was found to be at least 35,600 years old.

Evidence for modern humans in Northern Spain dates back to 41,500 years ago, and before them were Neanderthals. Our results show that either modern humans arrived with painting already part of their cultural activity or it developed very shortly after, perhaps in response to competition with Neanderthals – or perhaps the art is Neanderthal art. Dr Alistair Pike, University of Bristol

These new findings are particularly significant because cave art has always been difficult to date accurately. Using this new technique minimizes damage to the art and allows for much more accurate results.

The key development was our method to date tiny tiny calcium carbonate deposits similar to stalactites. We can now date samples of just 10 milligrams – about as small as a grain of rice. This has allowed us to find samples that had formed directly on top of hundreds of paintings, whereas the larger stalactites were much less frequent. Dr Dirk Hoffmann, National Centre for the Investigation of Human Evolution

A paper on the research, which was funded by the UK’s Natural Environment Research Council, was published this week in Science.