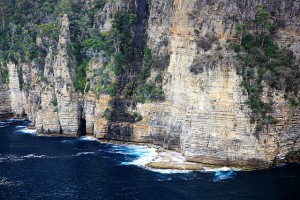 A 34-year-old jet-skier became trapped in a sea cave on the south-eastern coast of Tasmania earlier today.

Alerted around 1:30 pm, a police rescue helicopter was flown to the cave at Waterfall Bay but was unable to winch a rescuer to the site.

An officer was eventually transported part way into the cave via a private tour boat, and then swam the remainder of the way to rescue the man.

By the time the man was reached, he was suffering mild hypothermia. He was then helped out of the cave and into a waiting boat before being taken to Royal Hobart Hospital in Hobart.

Police suspect that had the man not been wearing his life jacket, he would have surely died.