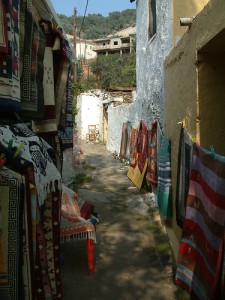 Construction workers in a small village in Crete discovered a magnificent cave full of stalagmites and stalactites this past Tuesday.

The workers, who were placing new biological treatment pipes, immediately contacted the president and the mayor of the town of Fodele, in the municipality of Malevizio to show them the discovery.

Local officials, including the municipality’s archaeologist visited the cave, though no ancient items have so far been found.

The responsible Ephorate of Antiquities was informed of the find and their archaeologists visited the cave on February 16th to “decide whether the cave covers all security measures in order to be included in the sites of the traditional village.”

Meanwhile the discovery of the cave has locals in a frenzy, imagining treasures hidden within.

According to local news reports, a guard, placed at the entrance of the cave to prevent curious people from entering, and the president of the community were attacked by a group of teenagers during an attempt to see the cave for themselves.