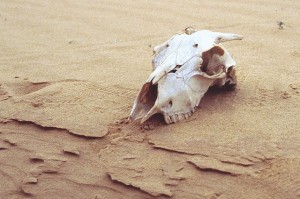 The drought affecting Texas this summer is giving resident bats a hard time. The lack of moisture has depleted the insect population so that bats are having to depart early from their daytime dwellings because they have to travel farther to find enough to eat.

At Bracken Bat Cave, home to the world’s highest concentration of bats, the little guys are having to emerge as much as two hours before darkness.

Leaving their daytime roosts before nightfall makes them more susceptible to predators. Hawks, falcons, owls, raccoons and snakes are known to make meals of bats.

Experts have also noticed fewer bats emerging from caves and have seen evidence that more infant bats are showing up dead.

An infant bat will not survive it it’s mother cannot provide it with enough food.

Although it is impossible to determine the true severity until 2012, it looks as though the population will decline.