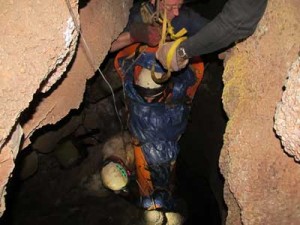 The seven-day course, which was held in mid-September, consisted of extensive classroom and field activities, including lectures, demonstrations, and other exercises.

At the end of the training, the groups were challenged with a full-day mock rescue in Jewel Cave. The rescuers responded to an overdue caving group on the Hub Loop, one of Jewel Cave’s main caving routes. Upon being located, an injured caver had to be extracted from the cave in a rescue litter though many obstacles.

If that isn’t enough, the rescue also included a lost caver which required the students to carry out a search in Jewel Cave’s maze of passages.

The course was offered by the National Park Service, who wanted to build a resource base of trained rescuers to respond to incidents at either park.

With Jewel Cave and Wind Cave, two of the longest caves in the world at 249 kilometers (155 miles) and 219 kilometers (136 miles) of passage respectively, being actively explored there is a real need to have trained cave rescuers on hand in case something goes wrong.