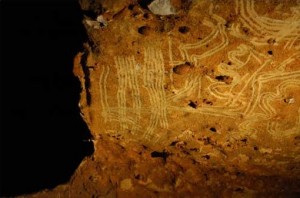 Cambridge University researchers who have recently developed a method to identify the gender and age of prehistoric artists put it to the test at France’s Rouffignac cave and discovered that the prehistoric etchings are the work of children as young as three.

Rouffignac cave, also known as the Cave of the Hundred Mammoths, contains over 250 works of art that date to approximately 13,000 years ago. The stunning drawings of mammoths, rhinoceros and horses which draw tourists to the cave represent only a fraction of the art found within the 8 kilometer (5 mile) long cave system.

Engravings, made by people running their hands down the soft surfaces of the walls and ceilings of the cave are by far the most common art form. The process known as finger fluting also appears in caves in Spain, New Guinea and Australia.

Researchers analysing those flutings have found that every chamber in the cave contains art made by children between the ages of three and seven. They have also been able to identify four specific children by finding similarities in the art. As it turns out, one of the most prolific artists was only around five years old, and almost certainly a girl.