This past August Team Petzl climbers and alpinists had the chance to visit France’s Gouffre Berger to try caving.

In 1955, caver Fernand Petzl was a member of the team that first reached the record-breaking 1000 meters depth at Gouffre Berger.

This goal of the expedition was to follow in the footsteps of Fernand 50 years later. A “dream team” was formed that would provide a learning experience for some, and allow others to take their caving to the next level.

A base camp was established between August 1st and 6th at Lans in Vercors. After an initial long day of technical calibration, the first descent to -500 meters (-1,640) was made. The objectives being, to make sure everyone was comfortable underground and to take photos. After a successful first step, the goal was set at full exploration of the cave, down to -1,122 meters (-3,681 feet). 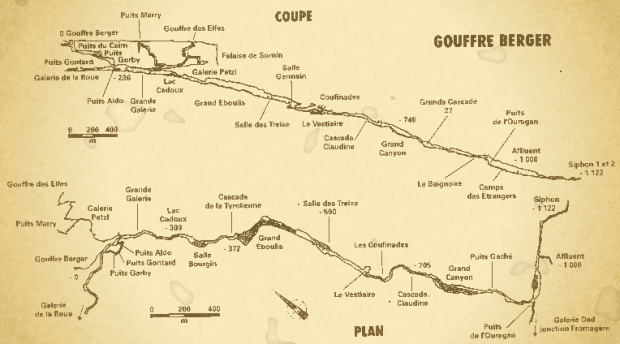 At 1:00 pm August 4, the group headed underground again and quickly descended the part that was already covered. Eight hours later, at 9:00pm, the group had reached the siphon at -1122 meters, and a bottle of wine was opened to celebrate. Soon after the long 12 hour ascension began.

A fitting homage to Fernand and the other first explorers.

Caving: Gouffre Berger, the team follows in the footsteps of Fernand Petzl [Petzl]