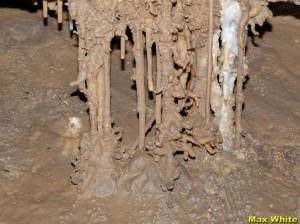 This past Saturday marked the dedication and open house of the brand new Lloyd & Ethel Hoff Underground Nature Preserve. The event held by the Missouri Caves and Karst Conservancy saw over 250 cavers in attendance, along with Perryville mayor Deborah Gahan, Perry County commissioners, and other dignitaries.

The development of the preserve allows for permanent access to Berome Moore Cave. First discovered fifty years ago on October 29th, 1961, it’s been surveyed to 29 kilometres (18 miles) long and is currently the third longest cave in the state.

Upon it’s discovery, the Lloyd & Ethel Hoff agreed to lease the entrance to the Middle Mississippi Valley Grotto. Now, 50 years later their children took it a step further and agreed to transfer the deed to the Missouri Caves and Karst Conservancy for the creation of an underground nature preserve.

During the festivities on Saturday, a stone monument was unveiled commemorating the Hoff family and all the caving organiztions who contributed to the preserve, followed by a recollection of the discovery by members who were on the original trip, a barbeque dinner, bluegrass music and of course a visit to the cave.

Now managed by the Middle Mississippi Valley Grotto, access to the cave is restricted and a conservation plan has been developed to ensure that the cave remains in good condition.

For more information visit the Middle Mississippi Valley Grotto or the Missouri Caves and Karst Conservancy.